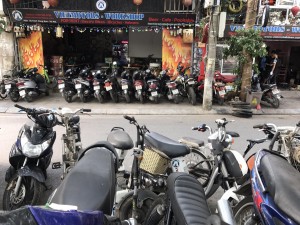 As a rapidly developing country, it makes sense that transportation in Hanoi is also changing quickly. When I first moved her, you basically had a few choices in terms of how you could get around: Motorbike, Taxi, Motorbike Taxi or Cyclo.

The first and most popular of course is to go by motorbike (xe máy). This is still the most popular way to get around, but this is slowly changing with the introduction of apps like Uber and Grab Car as well as the price of cars dropping rapidly due to a reduction in the import tax on foreign automobiles.

Back then, traffic was pretty intense, but it was nothing like what you see today in Hanoi. Nowadays, due to reasons mentioned above, roads are getting pretty clogged up, especially during rush hour in the Hanoi. So the old ways of getting around are changing rapidly.

Cyclos used to be a really fun option, especially on weekends when you may want to run around in a group. The prices were super low and it was a great way to take in the city without having to drive yourself. But the Cyclos are dying off due to the increase in traffic and the fact that it’s just too hard for these drivers to make a living anymore. In my opinion, this is one of the sad results of development. But hopefully, they will still be around as an option for some time to come, albeit in smaller numbers.

Most people in Hanoi are still pretty poor, so the only mode of transportation that makes sense for them is to drive a motorbike because they are cheap and easy to park. At the very low end of the spectrum, there is the public transportation system, which includes buses and trains. Bus fair across the city is literally only about 3,000-10,000vnd (fifteen to fifty cents!).

Then you have the wealthy who are buying very expensive luxury brand cars, which is one of the main reasons for the traffic becoming as bad as it is. It’s much easier to fit millions of small 100cc-150cc motorbikes on the city streets than it is to fit millions of large SUVs.

And finally, you have the increasing number of traditional taxis and ride sharing apps like Uber and Grab Car (the two most popular ones used in Vietnam).

So the Hanoian locals do what they do, but what mode of transportation is best for a Hanoi expat? I personally use a combination of motorbike and ride sharing. I use the motorbike for everyday travel and Uber on the weekends or during rush hour when I just can’t be bothered with being stuck in traffic and breathing in a bunch of nasty pollution for half an hour.

Uber is extremely cheap here. I would say the average fair in Hanoi is around 40,000 vnd, or less than $2, to get most places in the city. It’s also very convenient due to the density of the city as well as the fact that there are thousands of drivers with more signing up every day. So you can literally punch your address into the app and have a car pick you up within a couple of minutes

So you can literally punch your address into the app and have a car pick you up within a couple of minutes no matter where you are in the city. Now that’s what I call convenient! The cars are also really nice and generally new, so they are much more comfortable than a traditional taxi in addition to being cheaper. Those taxi companies have their work cut out for them.

But even though Uber and Grab Car are relatively inexpensive and super convenient, the cost still adds up if you use them exclusively (you’re looking at several hundred dollars per month). Having a motorbike is just so inexpensive that you’d be crazy not to drive one if you live in Hanoi, unless you are just too afraid of driving in the crazy traffic, which is understandable!

You can buy a used motorbike for $200-$3000 based on quality of motorbike (and of course a lot more if you want a really nice one) and it only costs literally around $2-$3 to fill up the tank with gas/petrol. Besides you can rent a motorbike at cheap (around $5- $10 / day). I rented a good scoter at https://vietmotorbikes.com/

So the cost of owning a motorbike is mind-blowingly low when you compare it to having a car back home in the West. This is one of the things that really lowers your overall living expenses here. It’s also really fun to get around by motorbike!